Genesis — Phil Collins, Michael Rutherford, and Tony Banks — have rescheduled their reunion tour a second time, due to the global pandemic. The dates, originally scheduled for November and December 2020 in the U.K. and Ireland have been now moved to September and October 2021. (Last July 24, the band moved the tour to April 2021. The magnitude of the pandemic proved those dates to be too premature.) See the revised schedule and new rehearsal teaser below.

From the Jan. 22 statement: “The decision to move the tour again is due to the global pandemic, and even with the roll out of the vaccine, there are still a huge amount of uncertainties and unanswered questions that make a tour in April difficult for everyone. It is appreciated, that for whatever reason, those planning on attending the shows may not feel comfortable doing so, so by moving the tour we can alleviate some of those concerns and in turn that will allow the band and the crew to prepare with less unpredictability and create a show that both the band and fans alike will treasure and enjoy.

“Existing tickets for the rescheduled dates will remain valid, and ticket holders will be contacted by their ticket agent.”

Watch the rehearsal teaser of “Behind the Lines,” released on Jan. 22

In a joint statement, Collins, Banks and Rutherford said: “Well let’s just forget about that last year and focus on 2021 shall we! We can’t wait to finally get this show on the road, but we feel the decision to move the tour is the best one for those planning on attending and for us as a band and crew. We hope now we can all relax a little more and focus on the music and having a good night.” 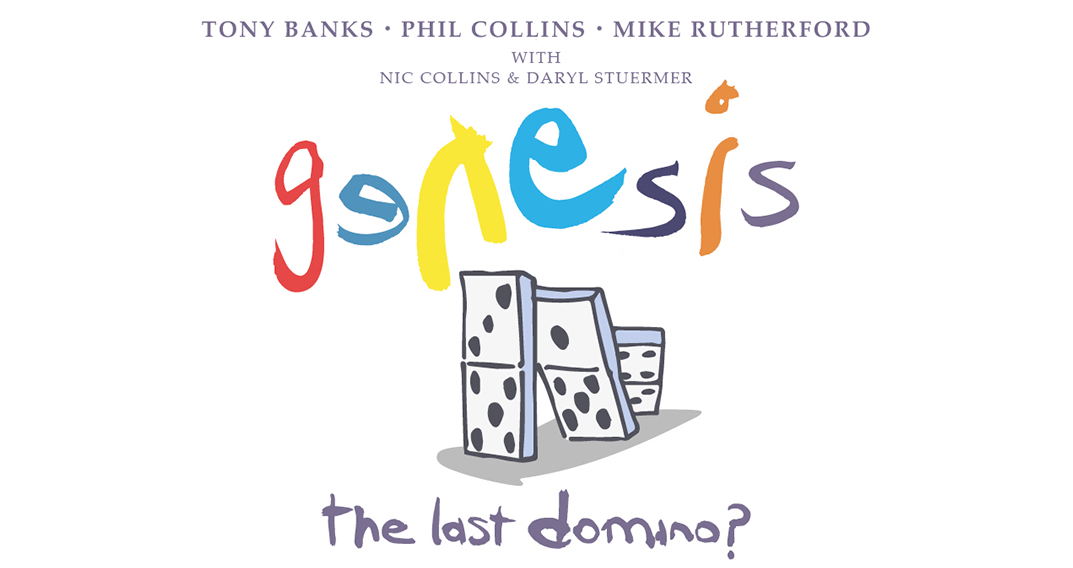 The band appeared live on BBC Radio 2 on March 4, 2020, to announce “The Last Domino?” tour, with the first 10 dates (now 19) in Ireland and the U.K. The run now begins April 1 and continues through Apr. 30. Tickets are on sale here and here. (Tickets previously purchased remain valid for the new dates.)

On March 3, the station teased their “exclusive reveal” that “a massive band is reuniting.” That same day, the group posted a photo of the trio on their Instagram account with just the phrase, “And then there were three…”

There was no indication whether the tour would be extended to other countries.

The trio was seen at New York’s Madison Square Garden on Jan. 22, 2020, when they attended a Knicks game though, oddly, Collins was not seated with the other two. At that time, speculation was rife that the group would reunite.

The group’s original frontman, Peter Gabriel, who left the band in 1975 for a successful solo career, is not involved. (He’s appeared with the group on stage several times since his departure.)

Watch Genesis perform a favorite during their 2007 reunion tour

Genesis concerts are known for having incredible light shows. Best Classic Bands asked Banks about that. “Great lighting effects can carry the music along and present more of a show,” he said. “If you got it right, you heightened the emotion of the music. I’m not the most visual person onstage,” he added with a laugh.

Due to severe issues with his back, Collins, who turns 70 on January 30, is no longer able to drum. He has also dealt with hip issues in recent years and now sits throughout most of his solo tour performances. They’ll be joined on this tour by Collins’ son, Nic, who has filled in for his father behind the kit during his recent solo tours. Longtime Genesis touring band member, Daryl Stuermer, returns on guitar and bass.

In 2018, Best Classic Bands asked Banks about an inevitable reunion. His reply: “Well, Phil is obviously not able to drum. But I never say we’ll never play together again.” Banks turns 71 on March 27.

Simon Collins: “I grew up on tour with Genesis, so I had a very early introduction to progressive rock”

Simon Collins: “I grew up on tour with Genesis, so I had a very early introduction to progressive rock” BY: LUCY O'TOOLE Following the release of his acclaimed solo album, Becoming Human, Simon Collins discusses moving to Ireland; the state of prog rock; and the influence of his father, Phil Collins, and Genesis. Photo: Only1AndyWright. After a turbulent decade for Simon Collins, the genre-blending multi-instrumentalist reemerged in late 2020 with Becoming Human – one of the […]

Phil Collins Finally Got His Ex-Wife to Move Out of His $40 Million Mansion After “Armed Occupation and Takeover” After four months of legal drama, the musician convinced his ex and her new husband to leave his property and already has a new buyer. BY EMILY KIRKPATRICK JANUARY 23, 2021 Phil Collins Finally Got His ExWife to Move Out of His 40 Million Mansion After Armed Occupation and Takeover BY JOHNNY LOUIS/GETTY IMAGES Four months after Phil Collins first sued his ex-wife Orianne Cevey over “an armed occupation and takeover” of his $40 million Miami mansion, it seems the pair have finally settled their differences. The judge presiding over the on-again, off-again couple’s case previously told them to drop the “scandalous” hygiene allegations and work out their property and financial disputes amongst themselves over Zoom instead of dragging things out in court. And despite their contentious back-and-forth in court, it appears they’ve done just that. The New York Post reported on Friday that not only has Collins finally kicked his ex and her new husband, Thomas Bates, out of his home, but he’s also already found a new buyer. The Grammy winner listed the 1.2-acre property for sale for $40 million in December while it was still being occupied by Cevey and Bates and, according to the listing, it now has a pending sale at an unknown price to an anonymous new owner. As part of a partial settlement of Collin’s lawsuit, and after her own counterclaim to $20 million or half the property was reportedly thrown out entirely, Cevey agreed that she would leave the home by January 21. Aside from once being the home of a legendary musician and the scene of much of his familial legal drama, the $40 million luxury property has many amenities befitting a rock star to offer its new resident. The Mediterranean-style 10,769-square-foot home built in 1929 has been consistently renovated over the years to include modern comforts such as stainless steel appliances, a temperature-controlled wine cellar with its own elevator, a summer kitchen, and a three-car garage. The interior boasts a two-story foyer with cupola ceiling and spiral staircase, a master bedroom with custom walk-in closets and private terrace, marble surfaces, and floors made out of 150-year-old reclaimed wood. The landscapes are equally stunning with a forest of palm trees, a 6,000-gallon koi pond, a pool, large boat dock, fire pit, fountain, Dominican coral stone deck, and 184-feet of private waterfront with views of the Miami skyline. ADVERTISEMENT According to the Post, Cevey and Bates have purchased and moved into their own $5.5 million waterfront property in Fort Lauderdale, but despite moving out, litigation between Cevey and Collins is still ongoing.